Turkey and Russia claimed the last two places for the 2014 FIVB Volleyball World Grand Prix Finals on Sunday as the Preliminary Round reached a dramatic conclusion. 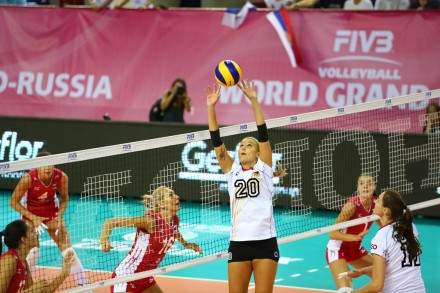 The two sides will join hosts Japan, Group 2 winners and World Grand Prix debutants Belgium as well as defending champions Brazil and China in Tokyo when the climax to the premier annual women’s volleyball tournament begins on Wednesday.

Kim Yeon-Koung had another high-scoring match with 30 points from 20 attacks, 4 blocks and six aces.

Dominican Republic ended their season with only one win that came during the first weekend of the Preliminary Round.

Brazil end the Preliminary Round having won 27 sets and dropped just three.

They are also the only undefeated team in the tournament.

It is the first time in five years that USA will not feature in the Finals.

Yuki Ishii stepped up on offence for Japan this time, with 24 points.

This is the first time Turkey have beaten Italy in the World Grand Prix. Italy won the last two meetings between the sides in 2008 and 2013.

It was the 11th win from 12 meetings in the World Grand Prix for Russia over German.