Glenn Hoag is a veteran of the volleyball men’s world championships with the 2014 edition his third consecutive as coach of the team Canada which is not the case for his son Nicholas, a debutant in such kind of big competition. 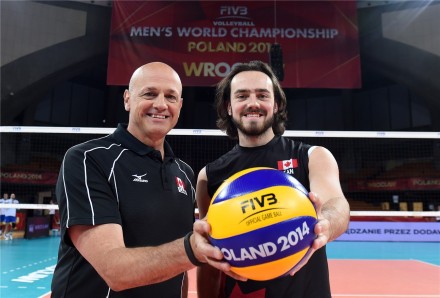 With only 14 international matches under his belt entering the world championship in Poland, the young Hoag is making quite an impact at the great scene as a formidable attacker and contributor to the success attained by his team during the first half of the event.
The 22-year-old Nicholas is currently the third best spiker of the world championship with an average of 57.88 of success behind Germany’s Denys Kaliberda (57.94) and teammate Gavin Schmitt (57.66).

“I am very happy for him being here, because he can contribute in that way,” Glenn said. “When he was younger I taught him that sport is about having fun while competing.”

The veteran coach, who took part as a player in the 1984 Olympic Games where Canada finished fourth in the volleyball tournament, praised the values of practicing sports.

“Sport is great, because it keeps you happy, especially the team sport,” he said. “So it is fantastic being part of such a huge tournament and now with my son also.”

Breaking Down the Prospect of Lottery Sponsorships