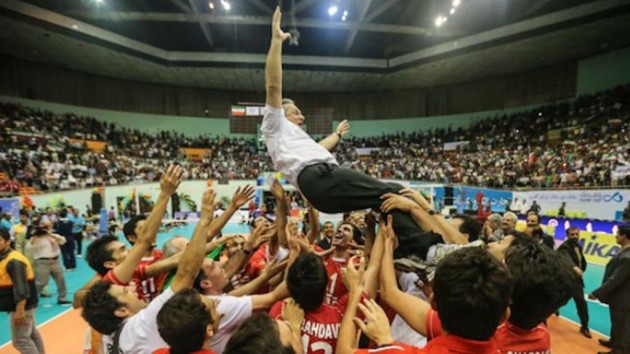 To be totally clear – with this result Iran and Poland will advance to the third phase along with France, while USA is eliminated from the tournament.

Truly this was one of the most dramatic afternoons at the World Championship 2014.  USA had to win against Argentina, as Iran had previously beaten Serbia, but squad of John Speraw failed in that mission.

His colleague on the other bench, Julio Velasco, managed to motivate fanatic Argentine squad to present probably the best performance so far at the tournament, despite being already without any chance for the third phase.

But, to be completely honest, we have to write that referees made a major mistake in the tie-break. At the result of 9-8 for Argentina, they missed to see an obvious block-out… Insted of a tie at 9-9, it was 10-8, and then Argentina took three more points in a row for 13-8…

Facundo Conte made 22 points for the winning side, while Sebastian Sole added 14. In the USA team, Matt Anderson and Taylor Sander scored 15 points each.

WCH M: Only one ticket left…

Thank you Argentina!!! Facundo, Nicholas, José… you can expect a nice welcome when you return to PlusLiga 🙂

I give my Especial thanks to the Argentina team, Good job boys!

I’m iranian and I LOVE U Velasco

thx Velasco …u made it..u helped Iran again …thank u so much

Regardless of the mistake in the tie -break, US had leads in 2nd and 4th set and lost them, this match could have been done a long time ago for the US if they did, so Congrats to Argentina for never giving up.

Dear Velasco,
You are in the deepest part of our haert.
Hopefully we will see you as a coach of Iran again.
Viva Lulio Velasco (Iranian hero)

velasco
we love you!
iranian piople

Mr. specific, Father Velasco thank you and your team

I always loved Velasco and felt he is a very special person. Last night he again proved me right.
Viva Velasco Viva Argentina and Viva Iran. Good bless you all.

THank you dear Velasco… we iranians Love you so much <3

Velasco is my hero.

OK, congratulations to Kovac and especially to Velasco. But wait a moment; don’t you remember who also helped this team reach this current position:
1. Jovika Cvetkovich from Serbia was the first one who selected this players in Iranian junior national team and winning the world junior championship with them
2. Koiak Milorad who was the first foreign coach for a few years in this team
3. Especially Zoran Gajik who really helped the team and the federation to make a step of the quality and to start negotiations to take Iran national team to play World League and who coached them before Velasco..

THANK YOU ALL! YOU DESERVE THIS SUCCESS ALSO. WIL WILL NOT FORGET THIS!!!

hey man! you are fantastic! you are the best coach. IRAN misses you father!
and I also would like to give my deepest thanks to my dear Kovac.