BEL M: Maan out for 8 to 10 weeks after suffering ankle injury

The team captain of Noliko MAASEIK, Jelte Maan, suffered a serious ankle injury during the match he played last week in Turkey versus Halkbank ANKARA for the second round of action in Pool G of the 2015 CEV DenizBank Volleyball Champions League – Men. 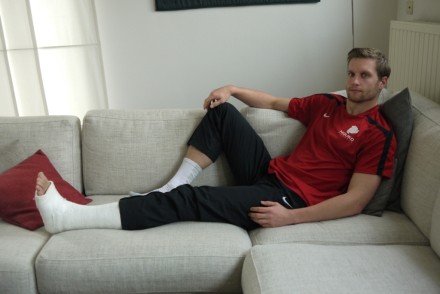 Maan suffered that injury at a crucial stage, right by the time the score stood at 19 all in the fourth set. Up to that moment, the 28-year old Dutch wing spiker had scored six aces and successfully killed 14 out of 24 attacks.

It was initially thought that Maan had twisted his ankle, but one week later it turned out that the injury is more serious than expected. Maan suffers from a crack in the talus bone and according to the medical staff of Noliko will have to sit out for a period ranging from eight to 10 weeks.

This means that Maan will certainly miss the double clash with Italy’s Sir Safety Perugia with the home match scheduled for December 2 in Maaseik and the away round following then on December 17 in Italy. Maan may also have to miss the last couple of matches on schedule for January where Noliko will be playing Halkbank and TOURS Volley-Ball.