Matías Sánchez, the Argentinian setter showed his game to the world and ended up being honored as the best setter at Boy’s U19 World Championship. 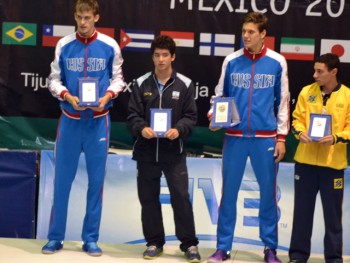 Matías Sánchez, 16 year old player was among the youngest ones at the Championship.  All the rewards he was getting so far were at national level, so this last reward was a real surprise to him.  “As at that time they had already called out the 8 rewarded players, I realized I was chosen to be the best setter. I didn’t know whether I was dreaming or it was real ‘’said Sanchez, adding: “It is a great honor and I didn’t expect it. Although I worked very hard for the World Cup, I wasn’t actually hoping to win something alike, but I am very happy. “

Matías Sánchez was not only selected to be part of ideal team, but he also finished first in the ranking at FIVB official statistics. In addition, throughout the tournament he received praises from coaches and other foreign players who saw him playing.

After Boy’s U19 World Championship is over, he summarized his impressions. “I enjoyed every moment of it. The way we played, the way we were as a team, I really enjoyed everything.“