In a repeat of the 2012 Olympic final, record World League winners Brazil will take on Olympic champions Russia in the first match at the FIVB 2013 World League Finals in Mar del Plata on Wednesday. 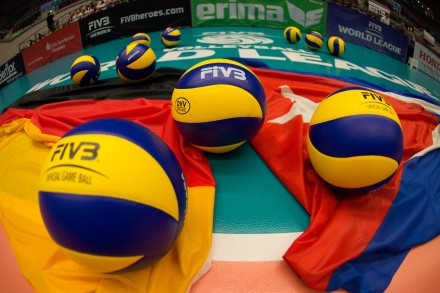 Six teams are out to win the jackpot, and the Brazilians arrive in Argentina with the greatest experience under their belt. “We obviously have our sights set on winning the title. My team is hungry for success,” says Bernardo Rezende, coach of the South American ball wizards.

One year after finishing sixth – their worst ever result – the team is looking forward to possibly claiming their tenth World League triumph. Alongside Russia, Brazil’s opponents in Group E will be Canada. Despite being the newcomer, Canada have proven their mettle and earned the respect of their opponents.

“We have a tough pool in the Finals,” says Rezende. “Canada has a great opposite spiker. Their style is similar to the American one. Russia always has a strong team. They have experienced setters. Their system is the same: a powerful serve and a solid block.” Russia won the World League in 2002 and 2011. Captained by the match winner from the Olympic final, Dmitriy Muserskiy, the team is now aiming for its first title under new coach Andrey Voronkov.

The other pool in the final round is Group D comprising hosts Argentina with Bulgaria and Italy. Argentina and Bulgaria will open this pool’s matches on Wednesday. The top two teams from each group will go through to the semi-finals with the final scheduled to take place on Sunday.

Although Argentina won just one match in the intercontinental round it has a valuable home advantage. They go into the tournament with their sights set on claiming their first a podium finish in the history of the World League. The Argentineans best result so far is the fourth place they achieved in 2011.

Bulgaria, who are also yet to finish in the top three are hoping to continue with their impressive form from the intercontinental round. This year’s team appears stronger than ever, and was largely responsible for the exits of defending champions Poland and last year’s finalists USA in the preliminary round.

New coach Camilo Placi recounted a special souvenir from last year’s edition of the World League. “I am sorry that Poland and coach Andrea Anastasi didn’t qualify for the finals, but I was here when he won last year in Sofia. It was then when he surprised me with a present and gave me the clipboard he used in the final match. I still keep it and it’s a good memory. But now we want to write a new shiny page in Bulgarian volleyball history,” he said.

Italy, meanwhile, have slipped seamlessly into the role of the dark horse. The Azzurris won their preliminary group, finishing above Olympic champions Russia. They have won the World League eight times in the past, although their last time was twelve years ago.

Coach Mauro Berruto said, “We are happy to represent our country and we will do everything to continue to honour the blue shirt we wear and keep flying our flag. Let’s go to Argentina thinking about the future, but with the desire to make our present unforgettable.”