ARG: Moment of truth for 8 teams – Beginning of Play Off

This Tuesday will begin the series of quarterfinals, best of five games, the League Volleyball Argentina Native Card Nation 2011/2012. 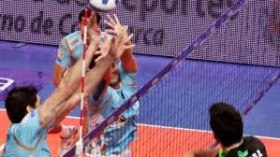 Buenos Aires Unidos will have a difficult match against Boca Rio Uruguay Seguros at 21h in Coloso de Parque Luro. The team led by Waldo Kantor got 44 points during the regular season and despite the ultimate defeat kept the fourth place.
“Xeneizes” got 42 points, with 13 games won in 22 matches and maintained their winning streak after beating Sarmiento Santana Textiles in their last match.

For the third time in the League, La Union de Formosa will have to face Sarmiento Santana Textiles. In the two previous meetings, the winner was Formosa with 3:0 as a host and  with 3:2 as the guest. The game begins at 21h in the Stadium Cincuentanario.

From 21.30h, Drean Bolivar, that is 1. on the scoreboard, faces PSM Voley that is on 8. place. The leader, got two straight victories  last weekend and wants to continue the good level of playing.

UPCN Voley closes the series when at 22h meets with Catamarca Voley.
The team from San Juan won twice with 3:1 as a host and 3:0 in Catamarca.