Sarmiento Santana Textiles, that entered the quarterfinals after finishing on 7. place on the scoreboard, is redy to meet with La Union de Formosa. 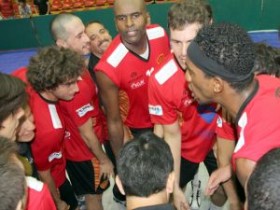 Venezuelan Ivan “La Bomba” Marquez of Sarmiento Santana Textiles passed to the center position and continued high performance in his playing. In addition, the team improved markedly in the reception and Sebastian Brajkovic, the scorer and captain, is playng in 2012 on a high level.

As for the duel with La Union de Formosa, the players of Sarimento Santana Textiles know that they are not candidates, although their main plan is to get at least one victory against them.

ARG: Moment of truth for 8 teams – Beginning of Play Off