The work of the Argentine Youth's Girls Team as all national teams goes on very steadily as all have a very demanding international season and therefore, the team coached by Guillermo Cáceres concentrates at the city of Coronel Vidal at the state-of-the-arts City Hall Sport Centre training for their South American Championship that could qualify them for their 2013 World Championship. 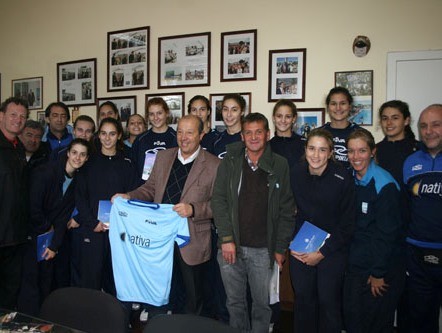 To show the support of all the city for Volleyball the City Hall Mayor welcomed the young team while the light blue – white players gave him as a present one of their jerseys.

The team played as part of their training friendly matches against Mar Chiquita team with each match sets planned before – no mattering the result of each of them.

The girls coached by Caceres won most of the matches.

After welcoming the visiting team now they plan a match in Mar del Plata.

GER M: BR volleys – Without Jaroslav Skach, but in the future with Sebastian Kühner

ARG: Registered teams and pools for the U18 National Championship that will be held as first competition of the year