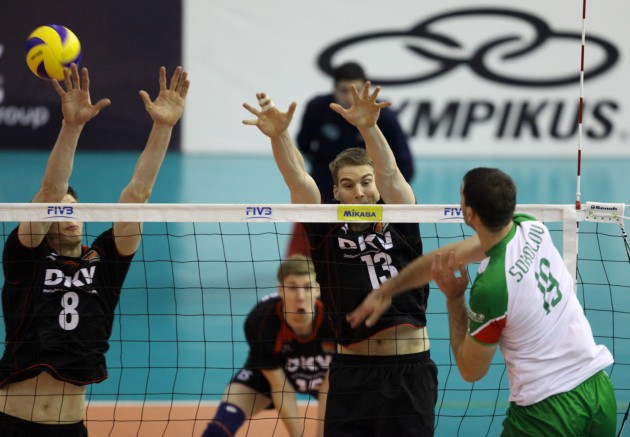 Tsvetan Sokolov was the top scorer for Bulgaria with 28 points while Jochen Schops was the highest scorer for Germany with 20 points.

Germany were looking to avenge a home loss to Bulgaria, the host country for the Final Six, and both started tentatively. Bulgaria made the first impression, getting an early lead of four points at the first technical timeout. Germany coach Vital Heynen called his players off court at 18-21, but a Valentin Bratoev spike closed the set in Bulgaria’s favour.

Then, everything changed and with Germany 5-1 up, Bulgaria coach Nayden Naydenov was forced to ask for his first timeout of the second set. Viktor Yosifov’s blocking helped level the scores at 5-5. Nayden used his second timeout with Germany up 11-7, but by the second technical timeout the lead was seven points. Bulgaria timeouts and substitutions did not help and the gap rose to 10 points before Germany levelled the set scores.

Bulgaria had lost their concentration and Germany kept the lead at the first technical timeout, 8-5, with the last point being a yellow card on Valentin Bratoev, the first of the competition in Argentina. Bulgaria could not find any answers. But when Tsvetan Sokolov scored an ace to make it 13-11, Heynen requested a timeout. Bjorn Andrae scored an ace and Germany led by four at the second technical timeout. A Valentin Bratoev serve into the net closed the set.

The big difference up to this point was in errors – 22 by Bulgaria to nine by Germany. In the fourth set, the two teams were even early on before Bulgaria went 11-9 ahead and Germany called a timeout. From there, Bulgaria never lost control of the set with a Sokolov ace finishing things off.

In the decider, Bulgaria led 8-7 and the two teams fought point by point until a Valentin Bratoev error gave Germany a two-point lead at 12-10. But the teams were level at 13-13 and Bulgaria were able to clinch the match.

WL M: Wilfredo Leon is Cuba’s ace as they down Russia 3-1