WL M: Wilfredo Leon is Cuba’s ace as they down Russia 3-1 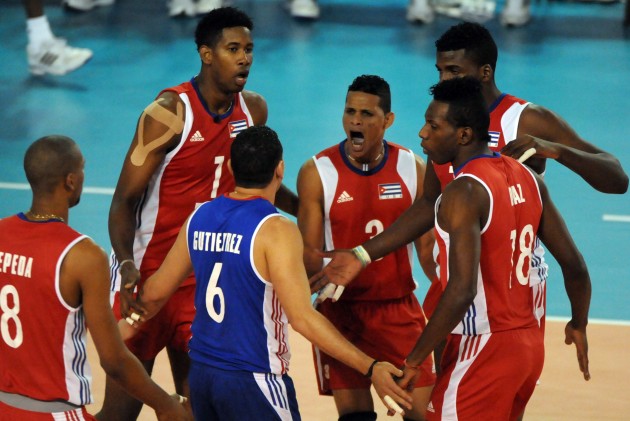 Cuba triumphed in all their three matches in the Dominican Republic stage and now sit at the top of the pool with a 5-1 win-loss record and 14 points. Russia fell to 3-3 and eight points.

Rolando Cepeda and Yenry Bell were key offensive contributors to the victory with 19 and 16 points, respectively. Maxim Mikhaylov topped Russia with 20 points while Evgeny Sivozhelez, Dmitriy Muserskiy and Dmitriy Ilinykh each finished with 11.

Cuba held advantages of 11-9 and 9-6 in blocks and aces, respectively.

In the early battle of the first set, Ilinykh and Cepeda each scored with two spikes but Russia was in front 8-6 at the first technical time-out. Leon evened up the score at 10-all with his spike. Mikhaylov and Bell traded blows and Isbel Mesa scored with a block on Nikolay Apalikov for a 13-12 Cuba lead. Mikhaylov killed to tie the score again. At 15-all, Leon hit one off the block and out of reach. At 18-18, Ilinykh and Bell traded spikes. Hernandez netted his serve but Cepeda nailed a spike to tie at 20-all. Cepeda then scored with a soft touch for 22-21 but failed with his next try. Alexander Butko’s serve was just a little bit long but Muserskiy provided the big hit to level the scores at 23-all. Cuba won the set 26-24 when Leon served a rocket ace.

Alexander Abrosimov scored with spike and ace to give Russia a 6-4 advantage early in the second set and the Russians led 8-5 at the first technical time-out. Cuba shortened the distance to 14-13 following straight kills from Mesa and Cepeda. Mikhaylov scored with a big hit from the back court after a Cuban error to make it 16-14 at the second TTO. Mesa blocked the attempt of Mikhaylov and Quintana blocked Muserskiy to tie the score.  Mikhaylov’s strong hit off the block gave Russia a 21-20 advantage, but Leon came up with a monster shot to level. Evgeny Sivozhelez and Pavel Kruglov scored two in a row, giving Russia a 23-21 lead. Mikhaylov blocked Cepeda for set-point at 24-21 and Muserskiy decided the set in favor of Russia with a smash down the middle.

Leon broke a tie at 4-4 in the third with a huge spike and Yoandry Diaz blocked Ilinykh. Mikhaylov landed a spike but Russia made two consecutive errors and Cuba was in front 8-5 in the third set. Mikhaylov and Muserskiy combined for spike and ace to cut the distance to 12-11. Leon and Bell answered back with strong hits for a 14-11 margin. Cuba led 16-14 when a shot by Mikhaylov went wide. Leon gave Cuba a three-point cushion at 18-15 with a massive shot. Mesa then hit one out but Leon compensated with another big bomb. At 21-19, Mikhaylov blocked Leon but Muserskiy committed a foot fault while serving. After an opponent error, Mikhaylov served an ace to close the difference to 22-21. Following a time-out by Cuba, he missed with his serve and Bell scored off the block for set-point at 24-21. Abrosimov blocked Leon but Ilinykh crashed his serve into the net to end the set.

In the fourth set, Leon scored two consecutive service winners for a 5-3 Cuban advantage. Abrosimov answered from the other side but Quintana blocked Sivozhelez. Abrosimov laced an ace. At 7-7, Bell scored to give Cuba a one-point lead. Mikhaylov evened the score with a stunning hit. Two furious spikes from Leon and one from Cepeda gave Cuba a three-point margin at 12-9.  Cepeda scored another from the back-court. Two more aces from Leon widened the gap to 16-10. Bell missed his killing attempt and Sivozhelez blocked Cepeda. After a time-out Bell scored off the block for 17-12. Kruglov and Mesa exchanged kills, as did Cepeda and Mikhaylov. Leon continued with his exploits and put Cuba in the driving seat at 23-17 with two more spikes. He was not going to stop and served an ace for match-point. Cepeda sealed the victory with another smash at 25-17.