On Thursday the vice world champions of Rabita BAKU advanced to the Playoffs 6 of the 2013 CEV Volleyball Champions League after edging – for the second time in about seven days – France’s RC CANNES, doing so in straight sets (25-19, 25-18, and 25-17) to play Russia’s Dinamo KAZAN in the next round of the competition. This and other volleyball news read on Worldofvolley.com. 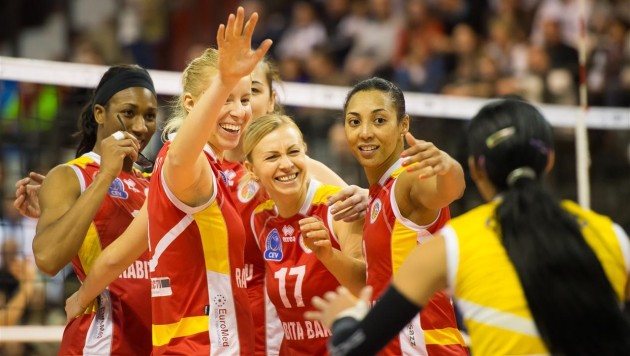 With many fans in attendance at “Sarhadchi Olympic Centre” Rabita started out with a series of great serves contributed by Puerto Rican Aurea Cruz; however, RC CANNES moved to the front even with a margin of five points before Rabita mentor Marcello Abbondanza opted for the right substitutions to get his side back on track and cruise to the final 25-19.

The second set was a real show of strength by Rabita that stood out especially from the serving line thereby wrapping it up quite easily with the score of 25-18.

Even though they were leading quite comfortably, the hosts did not slow down and paced by Cruz and Dobriana Rabadzhieva they could cruise to a well-deserved 3:0 win to make it to the Playoffs 6 and play there last year’s bronze medalist Dinamo KAZAN.

“I am very happy with the performance displayed by my players and that we could edge a great team like RC CANNES twice in a row” says Rabita coach Marcello Abbondanza. “Along the way to the final four we will have to stand the quality of another medalist from the past edition, i.e. Dinamo KAZAN”. “I am very happy with the victory and also have to state that the girls did a good job” adds Rabita captain Mira Golubovic.

“Our team really wanted to make it to the Playoffs 6 but Rabita showed a great performance” says RC CANNES team captain Victoria Ravva. “I am not satisfied with my team” concludes the Chinese-born mentor of RC CANNES, Yan Fang.