With the dates of the Final Four tournament of the 2014 CEV DenizBank Volleyball Champions League - Women, set to take place in Baku this weekend, fast approaching, the excitement in the Azerbaijani capital is rising. The organizing club of Rabita BAKU is hoping to win the trophy for the first time in its history, after having settled for the silver back in 2011 and 2013. 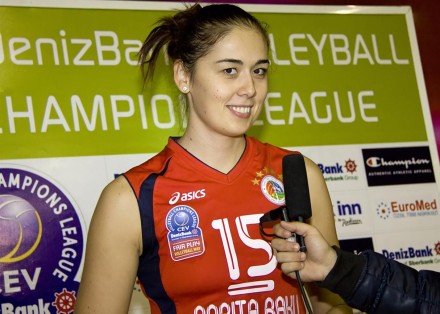 “We have been training so hard. I had some injuries from last year, but now I feel super energetic and cannot wait for the start of the Final Four,” says Serbia’s international star and Rabita opposite Sanja Starovic, the Best Spiker of the 2010 CEV Cup.  “The Turkish teams are the strongest ones among our opponents, but I think we are much better.  We have tried to analyze the opponents’ tactics and pull out some weak points from that.  At the end, I could say that we are hoping to dedicate this glory to our fans and to our country.”

In its semifinal match on March 15 in Baku Rabita will have the difficult task to play against Russia’s powerhouse Dinamo KAZAN.  The other semifinal on that day will feature an all-Turkish clash between ISTANBUL powerhouses VakifBank and Eczacibasi VitrA.  The bronze medal match and the decisive final will take place on the following day, March 16.