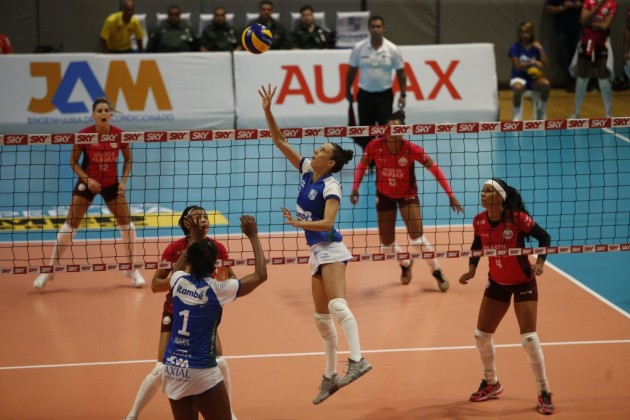 The packed stands at the Arena Minas Tênis Clube in Belo Horizonte (5,000 spectators) saw their team beating Osasco for the fourth time this season in four games and five of their players with double digits. Gabriela Guimarães “Gabi” topped them all with 17 points, including six kill blocks, while Caroline Gattaz “Carol Gattaz” made 79% excellent attack. American Destinee Hooker scored 12 points for Osasco. Peruvian Ángela Leyva made 80% positive reception.

The sixth seed SESI Vôlei Bauru did not manage to upset current Superliga champions Dentil/Praia Clube in front of own crowd in Game 1 of the other semifinal matchup. Actually, they have never beat Praia in the all 12 games that these two rivals have played against each other. Not even this season, in which the SESI franchise joined the club and in which these two faced off five times.

American Nicole Fawcett was the most deserving player in Praia for silencing 2,000 fans in Bauru’s Panela de Pressão hall (the Pressure Cooker in translation) with 18 points (four aces). The most productive player of Bauru this season, Tifanny Abreu, underperformed – only eight points.

Kovač for WoV: “I highly doubt that I will stay in Belogorie for the next season“