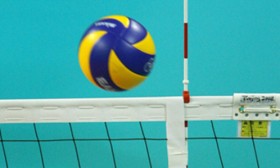 SKY celebrates the return to leadership

The Cimed / SKY was benefited by the defeat of  Vôlei Futuro (SP) for the BMG / San Bernardo (SP) with 1 : 3 in sets. With the negative result, the team Araçatuba, who led, fell to the third place and also exceeded by SESI-SP, which exceeded the Volta Redonda (RJ) with 3: 0 in sets. Cimed / SKY, SESI-SP and Vôlei Futuro  have the same 28 points, but took the advantage of Santa Catarina in the first tie-breaker with the number of wins. SESI-SP with nine positive and four negative results, appears ahead of Vôlei Futuro, which has the same campaign, by having a better balance of sets.

The spiker Rivaldo shone in the victory of Santa Catarina and was voted to be the best on court, winning Trophy VivaVôlei. The attacker was still the best scorer of the confrontation, with 22 hits.

“Everyone knew the importance of this game. This team is different because of its collective force. Regardless of any problem that we have the will power and experience of this group overcomes any obstacle. Each one stands on this team every game,” said Rivaldo.

In the next round, the Cimed / SKY will fight to keep the lead against the BMG / Montes Claros (MG), at 10am this Saturday (04:12) at the hall Capoeirão, in Florianópolis (SC). TV Globo will transmit it live. Have Medley / Campinas seek rehabilitation at 11am also this Saturday, against the Vivo / Minas, live on Arena Vivo Belo Horizonte (MG).

Turkey: Halkbank Torul Youth play away the match on Sunday