World No. 2 Brazil landed their second straight-set win at 2013 FIVB Women’s U20 World Championship by defeating Mexico. Best scorers of the match were Gabriela for Brazil (21) and Alejandra Isiordia for Mexico (16) 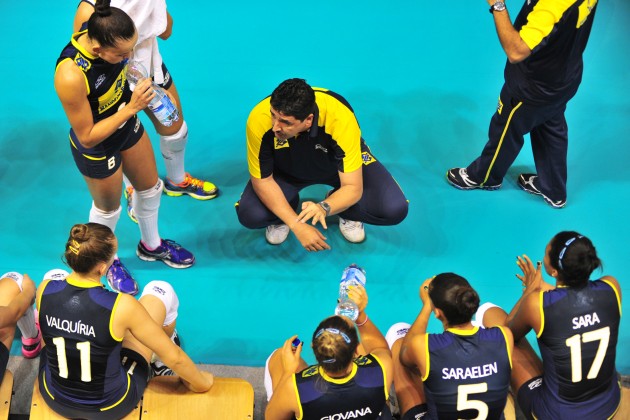 Brazil on time out

Brazil improve their win-loss ratio to 2-0 while Mexico drop to 1-2. Best scorers of the match were Gabriela for Brazil (21) and Alejandra Isiordia for Mexico (16).

The key moment of the match came at the end of the first set when a problem with the electronically score sheet broke the Mexican rhythm at 19-17. World No. 2 Brazil handled the 15-minute break in the better way. The young Brazilians geared up their engines during “money-time” to close out the first set 25-23. Brazil gained momentum in the second set with Gabriela on fire. Brazil’s captain scored 13 points for her team in the second and third period to offer the South Americans their second 3-0 triumph at 2013 FIVB Women’s U20 World Champs in Brno.

Brazil coach Luizomar De Moura: We began with some troubles today. We are not used to play that early. Our level during the first set was not perfect but then we concentrated more and played with more determination. Although we won the last two sets in style, Mexico was a strong opponent and there will be no easy contenders.

Mexico coach Estanislao Vachino: For sure, my players felt a little bit tired after their two tiebreak thrillers on Friday and Saturday. However, this is not an excuse. We are used to train hard. In the third set, I gave some key players a rest to be ready for our duel with USA.