The all-Asian match on Sunday at Kajot arena was the World Championship’s second win for China, despite all the efforts of Japan (3-0). These two teams now lead together the provisional standings of Pool B, on a resting day for the pool's third protagonist, Serbia. 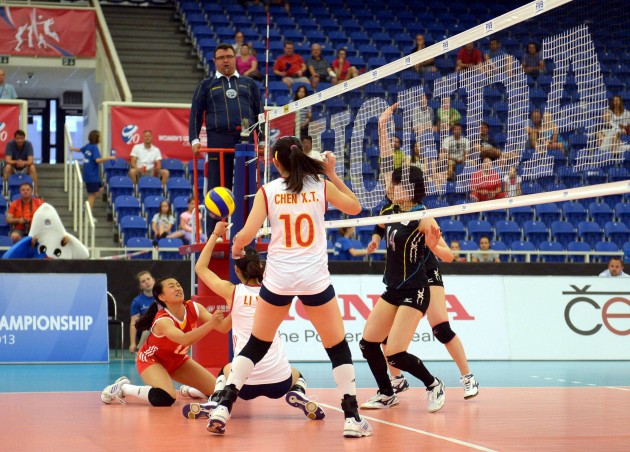 After a good start for Japan, China settled to take the lead 6-5. The Japanese struggled to break through the perfect defense of their opponents and to stop an amazing Ting Zhu (11 points in the first set).

China dominated the second set, starting from a 6-2 lead. Japan came closer only when they reached their 15th point (17-15), to eventually lose the set 25-18.

The third set was balanced, with both teams fighting for every ball: the teamwork of Japan was able to get the provisional lead 11-13. The two setters, Xintong Chen and Ayaka Hosokawa, loaded their weapons at their best.

However China showed much more experience and determination to win the set, especially with Zhu Ting who achieved to score 24 points in only 3 sets, with 4 blocks, 1 ace and a 19/37 kills in attack.

Japan coach Yasuhiro Fukuda: We played against the very strong team of China and although we led in the third set, I still feel that we could not win this challenge.

Japan captain Momoka Oda: China is a very strong team. We gave our best, but they clearly confirmed the role of favourite and deserved this game.

China coach Jiande Xu: In this game we were clearly better. The biggest differences I’ve seen were our technique and condition.

China Zhu Ting: We have always been a bit tepid on the start, but we played very well. Japan played much better in the third set, but we won.

WCHJ W: Algeria come from behind to outfox Nigeria