Brazil secured the top place in FIVB World League’s Pool A with a 3-1 victory over the United States in Rio de Janeiro’s Maracanãzinho gymnasium on Saturday. Ricardo Lucarelli and Mathew Anderson were the top scorers. 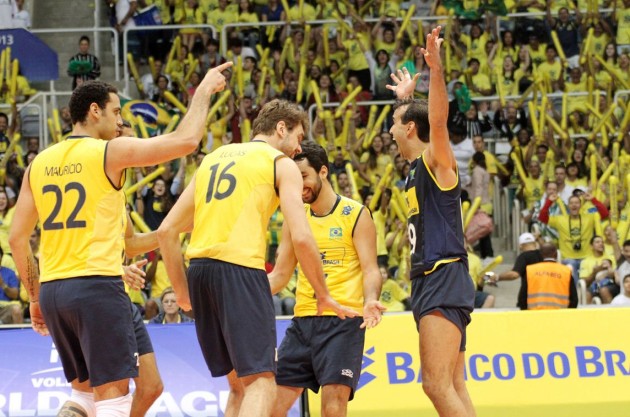 The result means USA cannot qualify for the Finals in Argentina.

Brazil started the match committing too many errors, and let the Americans jump 4-0 ahead. USA led almost all set, but spiker Ricardo Lucarelli’s great streak on serve finally put Brazil ahead (22-20). After an error by Antonio Ciarelli, Brazil won the set 25-22.

Brazil led 2-0 in the second set, but USA reacted immediately. However, middle-blocker Lucas Saatkamp made the difference with four consecutive aces and put the home side in front (12-6). Lucarelli’s attack gave Brazi the set, 25-18.

USA improved their block in the third set and opened a 5-1 advantage. Brazilian errors helped the Americans to keep the lead until the end of the set. With an impressive performance, Matthew Anderson sealed the victory 25-20.

The fourth set started close, and Brazil went to the first technical timeout ahead (8-7). Both defences worked well but a Lucão’s block gave Brazil a two-point lead (20-18). The home team won the set (28-26), and the match.

Brazilian Lucarelli and American Anderson were the match’s top scorers with 17 points each.

After today’s victory, Brazil has 22 points and is guaranteed at the lead of Pool A. With 12 points, USA has no longer chances to qualify to the Finals.