Belgium presented an impressive demonstration of power in the Final Four of 2013 CEV European League. The Belgian squad dominated Czech Republic 0:3 in the first match of Final Four of the tournament and reaches the big Final of the competition, thus extending a striking run of 13 victories in 13 matches. Dominique Baeyens, Hendrick Tuerlinckx, Stewart Bernard and Ondrej Boula commented the game. 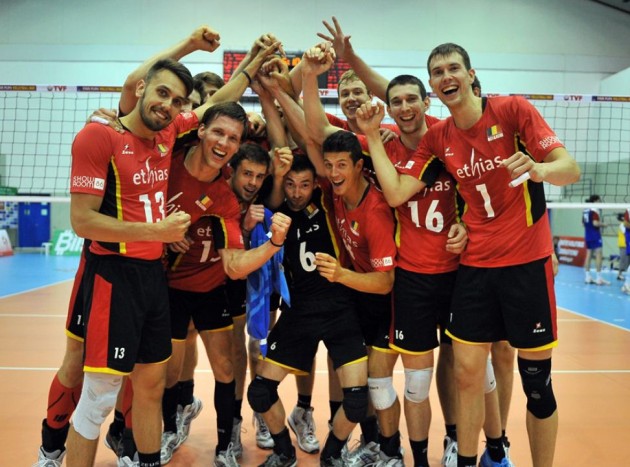 Czech Republic and Belgium met in the first Semifinal of the Final Four that is being held in Amiral Orhan Aydin Sports Hall of Turkish city of Marmaris, in a match marked by the extraordinary potential of the Belgian team. Dominique Baeyens’ men presented a spectacular performance and certified the qualification for the title-deciding match after shattering Czech’s dreams through a perfect balance of prevailing attacks and successful receptions.

The distribution of Matthias Valkiers and the effective serves of Belgian error-free players paved the way of the Red Dragons to the Final.

“In the first two sets we played at a very good level, not so much in the third period, in which we made more mistakes than normal. Czech Republic is a really good team and I know they are young and they are most likely going to make mistakes, but at the end, we had luck and won the game”, said the head coach of Belgium, Dominique Baeyens. “We have a good momentum now (after 13 victories), and we know that we can overcome difficulties, no matter how hard the situation is. That means a lot of confidence in our side”, pointed out the Belgium head coach, who added. “We are focused in the victory and we have winning experience; also, there’s a lot of discipline and a lot of potential. These are the reasons for our winning streak.”

“Winning a match 3-0 is always good for the winning side. We are now waiting for the final match and I hope Turkey will be the lucky side, as they are the host country”, pointed out Belgium captain, Hendrick Tuerlinckx.

Disappointment determined the state of mind of Czech team after the match, as the leaders of pool B aimed for their first Final in nine years but will now fight for the Bronze. “We did not play at a good level today. Simply put, we were not in the game. We managed to balance the score in the first set, but we couldn’t succeed and in the second set we were not good enough. In the third set, we were ahead of Belgium but we didn’t keep the level and ended up losing the period”, pointed out the Head Coach of Czech Republic, Stewart Bernard.

“It was a new experience for us, playing in the Final Four, but we were under a lot of pressure during all the match and we didn’t play well. Belgium is very much used to win, more than us, but I don’t think that had anything to do with the result; we couldn’t get out of the pressure, that was the key”, said captain of Czech Republic, Ondrej Boula.