Lucas - one of Brazil's top scorers in the 3-2 defeat at the hands of Russia explained that Russia's serving was one of the major reasons for their victory. 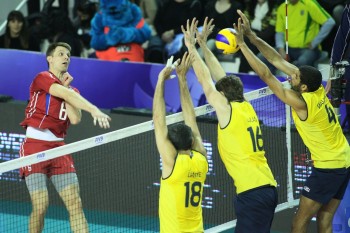 “We didn’t have a lot of chances with the first ball because they served really strongly and broke our phases a lot, and their distribution also made it more complicated. It was a really quick set, we didn’t have a lot of options to get into the set, they continued serving well and scoring points. After first set, we played really well. Our serves went well and we managed to get points and forced them to make errors. That’s the biggest reason we won the second and third sets.”

Lucas also shared his thougths about next game against Canada:

“We will rest, focus on the game against Canada and watch what happens in the game Canada vs Russi, tomorrow. I believe that our team is very strong but we have to battle and we have to play well.”

For more information from this country click on Brazil.