São Paulo, Brazil, November 30, 2011 – The 18th edition of the Women´s Superliga, the main clubs competition in Brazil, was launched on Tuesday in São Paulo. 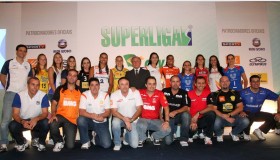 Alongside the presence of star players and coaches, the Brazilian Federation of Volleyball (CBV) completed the first serve for the competition which will see 12 clubs battle it out for domestic supremacy in the South American country.

Last season saw 500,000 fans watch the Superliga and that number is expected to increase for this season with 302 games taking place and more than 100 TV transmissions.

“One more time, this Superliga has everything to be one of the best competitions in the world,” FIVB executive vice-president, CSV president and CBV president Dr Ary Graça said.

“Volleyball is the second sport in the Brazilian´s preference but the first one between women. These athletes deserve that because they dedicate their lives to volleyball.  Nowadays it is difficult to be a professional athlete with discipline. And all here are.”

Among the highlights of the new season will be 41 year-old setter Fernanda Venturini returning to the court for Unilever along with Olympic champion Walewska who returns to the league for the first time in seven years after a hiatus abroad, turning out for Volei Futuro.

“The young girls are really strong but I did not feel gap in the physical part,” Venturini said. “In the last final, in Mineirinho, where Unilever was champion, one more time, I missed to be inside of the court. This motivated me to comeback. I am trying to pass my experience to the young players, in special to Roberta, the other setter in the team. She is taller than me and has a bright future ahead.”

Middle blocker Walewska said that she needed to study the new scenario in Brazilian volleyball. “It is a rehabilitation,” Walewska explained. “I am really happy to be part of Vôlei Futuro´s project. I could not choose a better club for my comeback. After so much time playing outside of Brazil I needed to watch videos from last Superliga editions to know a little bit more about these young players.”

CAVB Board of Administration nominees decided