Dresden, Germany, November 30, 2011. DRESDNER SC traveled to Istanbul via Berlin to play there its very first match in the 2012 CEV Volleyball Champions League against the local heroines of Fenerbahce Universal. 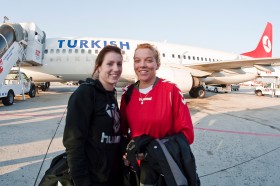 The participation in Europe’s most elitist competition is a great challenge not simply for the players but also for the Management Board of the club.

“Additional work and expenses result from the logistics and general organization” says Managing Director Sandra Zimmermann. The club has budgeted some 150’000 € for this adventure and is busy in dealing also with the TV production of its home matches, which is going to add some 10’000 to 15’000 € per game to the final bill.

“This is not like in soccer where clubs participate in the Champions League to generate more revenues. We have to work hard to maintain our sustainability” adds Zimmermann. “Anyway we have already fulfilled our dream to participate in the best Volleyball competition out there”.

Head coach Alexander Waibl states: “I have been coaching DRESDNER SC for three years. We won the Challenge Cup back in 2010 and last year we played in the CEV Cup. This time we have moved up another step and this steady development is a unique experience”.

“Rabita BAKU and Fenerbahce are world-class teams, but we still have a chance to qualify for the 1/8 finals as third ranked team of our group. ASPTT MULHOUSE is probably one step further than us but if we play our best, we can edge this opponent” adds Waibl.

Spiker Anne Matthes concludes: “To me and to all of us it is a real honor to participate in such an exclusive competition as the CEV Volleyball Champions League”.