In the game that marked the debut of Lucas in the jersey of Sesi-SP in Vila Leopoldina, the team sponsored by the industry gave no chance and won the duel in São Bernardo valid for the Paulista Championship 2013. 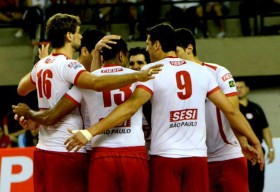 With partial 21-18, 21-18 and 24-22, Sesi has achieved another victory in the state and now is the new leader of the tournament with 14 points and five wins in five games. Now, São Bernardo has six points and had its second straight loss.

In evaluating his debut, Lucas said he still has a lot to evolve: ”I did well in attack, a bit uneven on serve and blocking. I can improve a lot. I trained very little after a week break,” he said, referring to the holiday period after playing for the Brazilian team in the conquest of South America and the silver medal in the World League.

Sidão was the leading scorer in Sesi in the game with 14 points, while Lucas scored 9.

In another game, in São José dos Campos, in the classic of Paraíba Valley region, Funvic/Taubaté failed to achieve its the first victory. They were eventually overtaken by São José by 3-0 (21-17, 23-21 and 21-14). The Taubaté has only two points and no victory. São José, who did not compete in the Superliga, now has 10 points from four games and comes third in the standings.

ADEUS, MESTRE: One of the best-ever world...