Bulgaria lost their second friendly match against France. After they managed to prevail the opponent yesterday 3-2 in Gorna Malina, today Camillo Placi’s boys had to give up 1:3 (25:15, 16:25, 23:25, 19:25) in the control match played at the full hall “Hristo Botev” in Sofia. 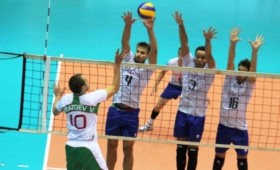 Bulgarian players will continue their preparations for the upcoming European Championship in Poland and Denmark, as next week they will participate in a friendly tournament in Slovenia, where they will play against the hosts, Canada and Denmark.

The match started well for the Bulgarians, who led 4-2 after a strong attack in the center of Viktor Yosifov. After the counter attack of Tsvetan Sokolov it was 9-6. The difference increased to 17-10 after ace from Viktor Yosifov to 19-11. Despite the efforts of the French, Bulgaria quietly won the set with 25-15 after a great single block from Aleksiev.

First technical break in the second set came with a score 8:5 for “roosters” after the attack in out of Teodor Todorov. Both teams remain equal, but Laurent Tillie’s team slightly increased their lead to 16-11 after a mistake in attack from Todorov. There was an excellent single blocking by Ngapet against Danail Milushev and it was 17-11. Despite the efforts of Bulgaria, France maintained their lead and took the set with 25-16 after two aces from Kèvin Tillie.

The third set also started well for the French team, who led 5-3 after an error on the net by Teodor Todorov. Bulgaria led 7-5 and 11-6 when Laurent Tillie had to call for time-out. Gradually, France erased the gap until they managed to equalize at 15-15 after Rouzier’s block. Once again, both teams went completely equal to 21-20. Despite the time-out by Camillo Placi, Rouzier realized counter for 23-21. Ultimately, France won the set with less errors, 25-23.

France continued its good play in the fourth set and led, first with 4-2 and then 8-6 after another error from service by Georgi Bratoev. The difference increased slightly at 10-7 after the second ace of French setter Rafael Redwitz. On the second technical break “roosters” led 16-10. Bulgarians gradually reduced the gap to 17-15 after the excellent block of Tsvetan Sokolov, who returned to play. France immediately regained the lead at 20-15 after a successful attack by Sidibé and after a service error by Sokolov, French team won the match.

Sokolov scored 12 points for Bulgaria, while the best in the French team was Rouzier with the same number of points.

See the profiles of France and Bulgaria.