Turkey finished unbeaten on top of the ranking in Pool A of the FIVB Volleyball Men's U21 World Championship in Ankara. 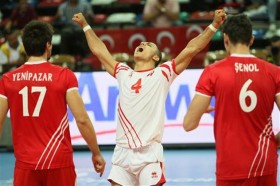 With fantastic support from the home fans at “Başkent Volleyball Hall”, the local heroes lost to China their first two sets in the tournament, but went on to stay on their winning path with a thrilling 3-2 (21-25, 25-19, 21-25, 25-20, 15-6) victory. China will face India on Monday in a direct duel for the second place.

What gave China the edge in an otherwise very competitive first set was their incredible blocking performance and especially that of Zhen Qin. He was responsible for four of his team’s seven blocks that contributed to the final 25-21 in the set.

In the second set, both teams showed excellent blocking efforts, but Turkey’s attackers were still able to put many balls on the floor, while China committed excessive errors. With six points from Gökhan Gökgöz, the home heroes rushed to a 25-19 finish of the set.

Productive attacking on both sides of the net provided for a high-quality third set. This time China were the team that made fewer mistakes and managed to claim the set by 25-21.

The Asian team continued to play well in blocking during the fourth set, but not well enough to prevent Turkey’s spikers from scoring another 15 points for the eventual 25-20 shaped by Uğur Güneş’s successful block-out in the end.

In the tie-breaker, the Chinese were no match to the home team. Inspired by the continuous support from the Turkish fans on the stands, the players of coach Ali Ümit Hizal established total control on the court and rushed to a convincing 15-6 finish with Gökgöz hitting the last ball of the match.

Gökgöz piled up a total of 22 points (5 blocks) on his account of the match to claim the top scoring position. Zhen Qin and Tingwei Yan scored 15 points each for China with Qin achieving seven of his by blocking.

See the profiles of China and Turkey.

TUR W: This is how Bosetti suffered...