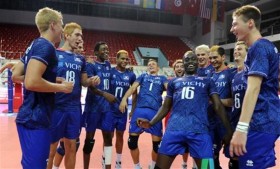 The match lasted more than two hours and entertained the spectators with fantastic volleyball skills providing a lot of thrills in what is described as group of death.

France improved their win-loss at the end of their group matches to 3-1, while Brazil dropped to 1-2 in three matches and still have their last pool match against Venezuela on Monday.

The amazing French outside hitters Trevor Clevenot and Thibault Rossard were the key factors in this victory, as the first contributed 22 points, while the other scored impressive 21 points.

Brazil‘s opposite Alan Souza and middle blocker Douglas Souza were both the best scorers of their side with 14 points each.

France surprised the South Americans with a violent start through organizing their net action as their reception was efficient, something made them arrange well their attacks, while on the other hand Brazil team committed a lot of reception and digging mistakes.

Franch outside hitters Rossard and captain Clevenot were in outstanding performance as they sent their razor sharp spikes which couldn’t be tolerated by the Brazilians. With this dominance, France went to 2-0 lead with a lot of mistakes committed by the losers

Brazil coach Leo did some substitutions in his team specially fielding the middle blocker Eder Kock and the outside hitter Douglas Souza, where he had a big improvement in his team’s outcome specially in blocking making over one of the best team blocking performances in the whole tournament. They could come back to tie the score at 2-2 and extend the match to tiebreaker.

Brazil showed a lot of motivations in the tiebreak using again the quick attacks through Leandro Santos beside the role of the opposite attacker Alan Souza, but France was the better conclusive team as they finalized the situation 16-14 to their side.

See the profiles of Junior national teams of Brazil and France.

BRA M: Canoas confirmed to be favourite, passed 1st round of Gaúcho