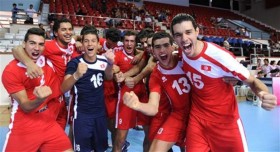 Tunisia improved their tournament’s win- loss ratio in 4 matches to 2-2, while USA dropped to 1-2 in three matches and still has one match to play in Pool C against their neighbour Canada on Monday.

Although Garfi changed his position from middle blocker to outside hitter to replace the injured captain Ousama Mrika, he was one of the match stars with his performance offensively and defensively.

Tunisia had powerful start organizing the attacking combinations led by the setter Khaled Ben Slimane who used the strong attackers Malek Chekir and Elyes Garfi to put US players under pressure. Tunisia also organized the backline defence in the best way to win the set 25-23.

The highly spirited Tunisian continued the same rhythm in the second set and kept their defensive solidarity. Also their coach replaced the opposite Adam Oueslati by Montasar Ben Brahem who played his best leading his team to win the second set in an easier way 25-19.

US team emerged properly in the third set as their blocking activity improved to the utmost to stop a lot of Tunisian attacks with Thomas Jaeschke spiking effectively leading his team to win the set 25-19.

Tunisia regained the rhythm and performance in the fourth set and succeeded to win it bravely with a lot consistence in reception and attacks to win the set 25-22 and the match 3-1.

Outside hitters Malek Chekir and Elyes Garfi were Tunisia‘s best scorers with 12 points each, while USA‘s spiker Michael Henchy contributed with 13 points for his team as best scorer.

See the profiles of Tunisia and USA.