Iran continued their winning streak at the FIVB Volleyball Men's U21 World Championship in Turkey with a spectacular straight-set victory over Japan. 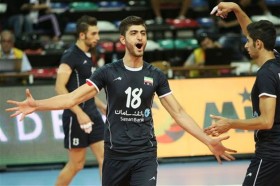 The two Asian teams played an exciting and competitive game, in which coach Farhad Nafarzadeh’s squad defeated their opponents by 3-0 (28-26, 29-27, 25-18) to stay on top of the pool ranking.  Having played all their four games in the pool, the Japanese now have to wait for the match results on Monday to find out if they make it into the Round of 16.

In a really tight and exciting first set, the Iranian team was able to overpower their opponents to please their many enthusiastic supporters on the stands.  As no team was able to break away by a substantial difference, it was Japan that first reached set point at 24-22. However, Iran won the next three rallies to prompt a really interesting ending.  Eventually, Seyedarash Taghavi found the strength to attack successfully for that break point that closed the set at 28-26 Iran’s way.

The great show on the court continued as the fierce battle between the two Asian powers provided for a truly spectacular second set. Whole-hearted play on both sides of the net and exhilarating long rallies characterized this part of the match. Iran’s powerful attacks found their match in Japan’s incredible digging and blocking performance. With the set well into overtime, Iran took advantage by a step-over fault of a Japanese player to win by 29-27.

Inspired by both, the outcome of the first two sets and the fantastic crowd cheering them on, Iran were clearly the better team in the third set. They managed to break away in the score and with an almost error-free performance maintained their lead through the final 25-18.

Yuki Ishikawa’s 19 points for Japan made him the top scorer of the match. With one point fewer, captain Javad Hosseinabadi was Iran’s most productive player.

Also, see the profiles of Iran and Japan.

RUS M: Spiridonov – “What was the point of friendly against Dynamo?”