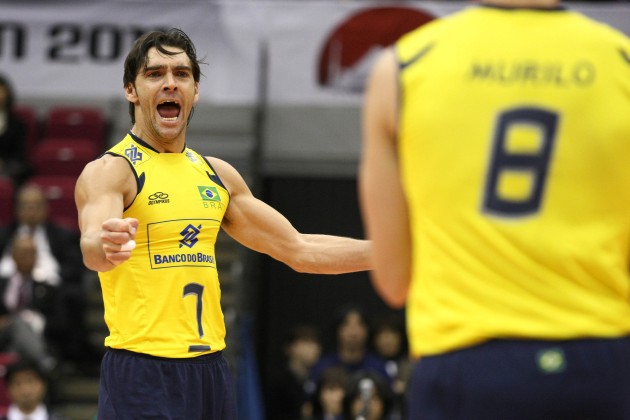 Accompanied by Dr Ney Pecegueiro, the Olympic champion and three-time world champion said his focus is now on the London 2012 Olympic Games and a second gold medal.

“From today on, I am on an Olympic project,” the 35-year-old said. “I will take care of myself and do whatever I need to be in shape for London. I am pretty sure the surgery was the best option as the traditional treatment did not work as we expected. I could not play the South American Championship and, as I needed to play more than I expected at the World Cup, as Dante was injured, the fracture happened.”

According to Dr Pecegueiro, Giba will not be able to train for two months and can begin playing again in a full capacity in three months.

“We introduced a titanium rod on his tibia so the fracture can heal faster,” Dr Pecegueiro explained. “Now Giba needs to recover from the surgery, which is aggressive to the organism. In the next three weeks, he will not be able to put his left foot on the floor. According to the fracture’s consolidation, he will start physical work. The surgery makes the recover quicker than usual.”

“When it is about Giba, everything is possible,” he added. “I used to say he is not from this world [in terms of recovery].”

Monday´s surgery was the first in the seven-time World League champion and two-time World Cup winner’s long career. In over two decades as a player the worst injury Giba has suffered has been two twisted ankles.

“The first time was in the 1998 World Championship, when I fell over a ball, but kept playing, even if I had broken the ligaments,” Giba, who has also won eight FIVB Volleyball World Leagues and two World Cups, said. “In 2008, before the Olympics, I also twisted my ankle, but I recovered in time.”

“I believe volleyball´s structure is different. I came to Rio de Janeiro one week before the surgery and talked to Dr Ary Graça [FIVB executive vice-president and Brazil Volleyball Federation president] and he said he was with me for whatever I needed. I have worked with him for over 10 years and I know and appreciate the support he gives to the sport.”