Adenízia, Carol Gattaz, Fabiana and Walewska will be the four middle blockers of Brazil at the World Grand Chamions Cup, 12-17 November in the cities of Nagoya and Tokyo, Japan. 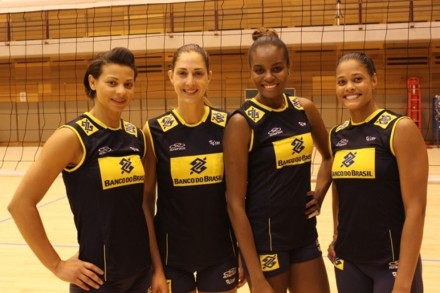 With heights ranging from 1.87 m and 1.94 m and many titles in the bag, the players represent a generation of tall, talented athletes who have brought much joy to the Brazilian fans.

In the last edition of the Grand Prix in September this year, Brazil have won title and Thaísa was the best player of the competition and also took the award for the best blocker. Because of Thaísa`s and Juciely`s injuries, coach José Roberto Guimarães has convened two athletes with a big history in the national team and with over 1.90 m, Walewska and Carol Gattaz.

A captain Fabiana believes that the time is important for the middle blocker position in volleyball. “We have a generation of athletes high as Thaisa, Carol and Walewska. We also need to continue seeking players with this stature for the future. All teams in the world have higher power. Today it is a global trend” said Fabiana and added “Motivation is high. We have great expectations. We seek more overall conditions this title to Brazil. We know that we have a complicated competition. We will face strong teams like the United States and Russia. They will be great games and want to get out of here with a victory, “stated the captain.

RUS M: Huge win for Iskra in seventh round