BRA W: Mackenzie/Cia do Terno and Unilever in quarterfinals

On Tuesday will be played 3 games of the first round of the quarterfinals in Super League for women. 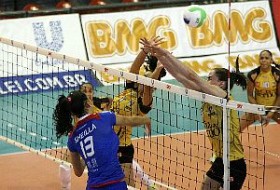 Mackenzie / Cia do Terno vs Unilever

The first match will start at 16:30h, between the second in the qualifying stage, Unilever (RJ), and the seventh, Mackenzie / Cia do Terno(MG).

The second match will start at 18:45 between Volei Futuro (SP), the third, and Banana Boat / Praia Clube (MG), the sixth.

The last match will be played between Usiminas / Minas (MG), placed fourth, and SESI- SP, the fifth.

Unilever comes to play-off after a good campaign in the classification stage.

The team led by the coach Bernardinho lost in the first round against SESI – SP, and then won their next 19 games, scoring a record in the Super League.

Sheilla of Unilever, the best opposite player in Super League, is concerned with the current formation of Mackenzie.

“It is a young team, with strong spikers in the attack and it has much responsibility. On the other hand, we are in a new phase of the championship. We have to get focused because they have shown that they can beat any team.”

The opposite of Unilever still calls attention to another detail: “We have to go into court with a lot of concentration and it is important to maintain a consistency throughout the game. We have had ups and downs during a match, and this cannot happen anymore in this phase of play-off.”

Unilever is classified with 57 points and the campaign of 19 victories and 3 defeats.

The center of Mackenzie, Lara comments on the rival: “We are studying their game a lot, watching and analyzing videos of other games. We hope to get very focused and concentrated and surprise Unilever. “

FIRST ROUND OF THE QUARTERFINALS

RUS W: Superleague. Women. The results of the regular season

ITA A1: Serie A Sustenium: results and quotes