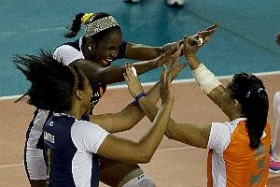 Usiminas / Minas started well and opened the first set with 4:1.
However, already to the first technical timeout, SESI – SP got to 8:6.
From then on, they dominated the whole set.
The best performance in block of SESI – SP had the opposite Elisângela, scoring 9 points.
The set ended with 25:17 for SESI.

Usiminas / Minas did not give up and recovered in the second set.
With the excellent service, Minas took the lead of 10:5.
The highlight was Cuban Herrera, who with strong attacks, helped her team reach the result of 16:8 until the second technical timeout.
The block of Minas made a difference and helped the team take a great advantage (20:10).
SESI – SP made four consecutive points, but the hosts returned the score of the previous set of 25:17.

In the third set the game was balanced. SESI – SP took the lead of 6:4, but with two consecutive points, Usiminas / Minas got to 7:6.
However, it was Sesi that reached the first technical timeout leading with 8:7.
The team from São Paulo took the lead and scored five points 20:15.
Minas failed to reverse the situation and SESI scored 25:22.

In the fourth set, Usiminas / Minas started well with 8:6.
They continued with good playing and came to score of 18:15. Then Sesi evened the result.
The very end of the game was exciting. After the ace of Natasha, Usiminas / Mines scored 24:23, but Herrera equalized with an error (24:24). However, they won the fourth set with 26:24.

In the tie-break, after the block of Sassá, SESI scored 4:2.
Usiminas / Minas evened with 5:5, thanks to the attack on Herrera.
After a counterattack of Fernanda, Minas took the lead of 11:09.
After two counterattacks of Herrera, they went ahead and got to 13:12.
Scoring 15:13, Minas won the match and qualified for the semifinals.