The technical staff of the Confederation of Brazilian Volleyball (CBV) released this Wednesday (21.03), the official schedule of the semifinals of the Super League for women. 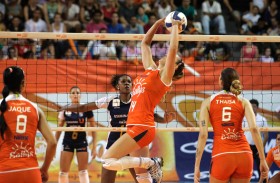 The first game will be this Saturday (24.03), at 10h, between Sollys / Nestlé (SP) and Usiminas / Minas Gerais (MG) in the hall José Liberatti in Osasco (SP), and will be broadcast live on TV Globo.

The second game between Sollys / Nestle and Minas will be on March 30, at 18:45h, this time in the Arena Vivo in Belo Horizonte (MG).
If necessary, the third game will take place on April 6, at 18:45h, again in Osasco.
Both matches will be broadcast by the channel Sportv.

The other series of the semifinals of the Super league is between Unilever (RJ) and Volei Futuro (SP).
It will begin next Tuesday (27.03), at 21h, in the hall Placido Rocha in Araçatuba (SP) and will be broadcast live on Sportv.
The second game will be on March 31, at 10h in Maracanazinho, in Rio de Janeiro (RJ).
This match will be broadcast by TV Globo. In the event of an even result, there will be the the third and decisive showdown on April 6, at 21h, again in Rio de Janeiro.

The remaining positions in the Super league are already defined.
SESI – SP, eliminated by Usiminas / Minas in the quarterfinals, took the fifth place.
Banana Boat / Praia Clube (MG), that lost against Volei Futuro, is on the sixth place, while Mackenzie / Cia do Terno (MG), which was defeated by Unilever, finished seventh.
BMG / San Bernardo eliminated by Sollys / Nestlé, is on the eighth position.

Four teams that competed in the qualifying round and did not get to the Super League play-off are: Pinheiros (SP), Rio do Sul (SC), Macae Sports (RS) and São Caetano (SP).