Athens, Greece, March 21, 2012. A special memorial was held this past Saturday at the premises of the Greek Olympic Committee in Athens to recall the legacy of the late Michalis Mastrandreas, a former CEV President and FIVB Vice President, who passed away three years ago. It was a very emotional moment for everyone, especially as Emili Mastrandrea presented the current President of the Hellenic Volleyball Federation (HVBF), Mr. Achilleas Mavromatis, with the personal archive of her beloved brother. 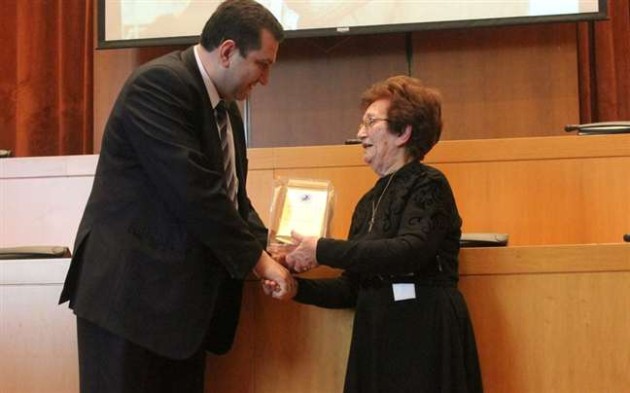 CEV President André Meyer, FIVB 1st Executive Vice President Theofanis Tsiokris, as well as the Honorary President of the Cyprus Volleyball Federation, Andreas Stavrou, all sent a special message to express their gratitude to the late Mr. Mastrandreas and recall his memory.

“As I assumed the Presidency of the Hellenic Volleyball Federation, I had set such a ceremony as one of my priorities. Because of the many problems that our country and hence also our sport have been going through in the past months, this memorial is finally taking place only today” said Mr. Mavromatis while opening the event.

“I feel happy and very emotional at the same time to be here and honor the memory of Mr. Mastrandreas. I did not have the chance to work with him as he was chairing our Federation but we have crossed our ways and I can only say he’s the one who contributed that terrific development of the sport in our country and helped Greece step up in the international arena. I would like to thank him for what he did for Volleyball, I am sure he is somewhere up there watching us happily. Many thanks also to his sister Emili for this donation to our Federation”.

CEV President André Meyer wrote in his address: “Michalis Mastrandreas was a true personality that enormously contributed to the development of our sport. I remember him as someone who was really fond of Volleyball – we may say a true passionate – always ready to help boost its popularity and development by investing time, energy and leadership for the good of the sport. His contribution and charisma are still missed but I am sure that his legacy is still alive and being continued by all those who are currently managing Volleyball there in Greece with that same spirit of passion and dedication which is even more required by the difficult times that the country is being currently confronted with”.

Emili Mastrandrea, visibly touched, said: “I would like to thank you for the tribute you are paying to my brother. All of you have met Michalis and know how much passion he had for Volleyball. The sport was a daily experience for Mike and I was always proud of him”.

Some memorabilia that belonged to the late CEV President will find their place at the main entrance of the HVBF headquarters.

Plaques, historical photographs, including accreditations from events that took place all over the world, are now stored in a special gallery available to any Volleyball fan who would like to have a look at this rare material.