Sada Cruizeiro (MG) and Volei Futuro (SP) started with the preparation for the final match that will be played this Saturday (April 21). The match will be broadcast live on TV Globo, Sportv and Esporte Interativo. 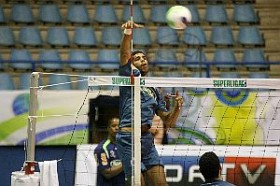 The setter of Sada Cruzeiro, William, is willing to change the history from the past season, when his team finished as the vice-champion.

– I consider this  game will be the classics of the Brazilian Volleyball. Volei Futuro  is a team of tradition. In past years we did not manage to win in the final, so this year we want more than everything else to get the title.

The teammate of William, the opposite Wallace, guarantees that the team is prepared for the decisive match.

– We are calm. Our team is extraordinary and deserves this title – says Wallace, who is the third best scorer of the Championship with 458 points.

The best scorer in the Super League with 516 points, the opposite Lorena, of Volei Futuro, confirms that two victories over Sada Cruizeiro this season of 3:2 and 3:1, do not secure the same result in the final match.

– Two defeats of Sada Cruzeiro, do not mean that they are an easy rival. The game will be balanced, because both teams are well prepared and should be congratulated on the level of playing in the competition. As always, we will play with emotions. We want the title equally as the opponent, so the better will take the victory.