Arkas Izmir defeated Halkank Ankara with 3:1 in the playoff match. In the first set Arkas clearly won with 25:17. 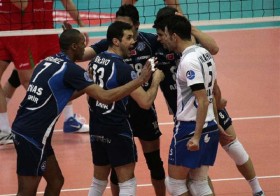 In the second set, the team led by the coach Glenn Hoag was also better than the opponent and took the victory of 25:18. Platenik and his teammates managed to improve the score in the third set, defeating the rival with 25:18. However, Halkbank let Arkas take the lead in the fourth set, winning with 25:19.

TUR M: Arkas get stunned by Bursa who...