BRA M: Ricardo speaks of happiness as he returns for Brazil

Brazilian star and 2004 Athens Olympic Games gold medallist Ricardo Garcia said he is “so happy” that he has been re-called to the men’s team following a five year absence, with the setter included in coach Bernardo “Bernardinho” Rezende’s squad for the 2012 FIVB Volleyball World League. 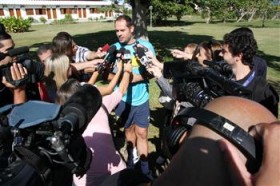 Ricardo´s last match for Brazil was in the final of the 2007 edition of the tournament, where he helped his country clinch gold, claiming the MVP award along the way.
“There was not a single day that I did not think about being back and I am so happy for returning,” the 36-year-old said. “Meeting the players and the staff again has been great. I sit in my room at Aryzao (the Brazilian Development Center, in Saquarema) and remember all the good things I have being through here with the team.”

Bernardinho also praised the player´s return and talked about the importance of Ricardo to the group.

“He came with the goal of making what everyone expects from him, which is being a part of the group, with a very important role for the quality he has,” he said. “He can help a lot and we want to build a group with him.”

Practising alongside Ricardo at Aryzao is setter Bruno, opposites Theo, Wallace and Renan, middle-blockers Sidao, Lucas, Rodrigao and Eder, wing-spikers Giba, Murilo, Dante, Joao Paulo Bravo, Lucarelli and Mauricio, besides of liberos Sergio and Mario Junior.
Brazil will face Poland, Canada and Finland in Pool B of the FIVB World League with the first weekend of the tournament set to be held in in Toronto, Canada from May 18 to 20.