Hosts Bulgaria and Germany scored their second consecutive wins at the CEV Continental Olympic Qualification Tournament in Sofia on Wednesday to book their place in the semifinals, set to take place on Saturday. 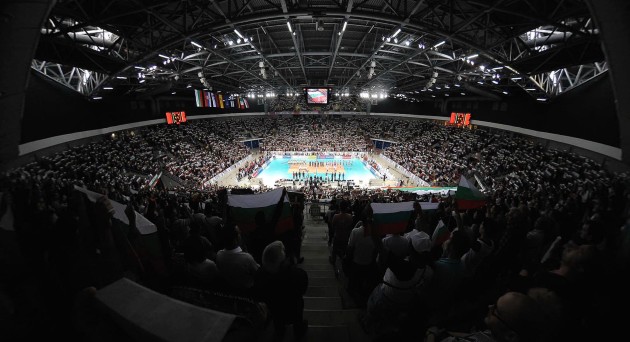 Spain sealed a win over Slovenia in the rest of the day’s action with the Spaniards set to take on Serbia on Thursday.

Germany became the first team to secure a spot in the semifinals with Marcus Böhme scoring 18 points. This was matched by Finland’s Mikko Oivanen but his side couldn’t close out a number of vital points.

“It was very hard for us against an opponent who was playing very wisely with the serve,” Finland captain Tuomas Sammelvuo said. ”Germany’s offense was excellent too. Finland had its good moments today, but the countless mistakes cost us the victory.”

“Our team played a really good game today,” Germany captain Björn Andrae said. “We won a tough first set after coming back in the result. That made things easier for us. We were very successful in blocking and defense and were very precise in following our tactics.”

“Finland started the game with 100 per cent of its power and energy, but then we suffered a real shock after losing the first set. After that we lost some of our motivation and concentration.” Daniel Castellani, coach of Finland, explained.

His German counterpart Vital Heynen disagreed however saying: “I think there was no difference between the two teams today. The result came from a physical standpoint – yesterday Finland played five tough sets against Italy, while we won our first game easily.”

Later on in the day Bulgaria managed another straight-sets win shutting out traditional rivals Serbia as the two Balkan powerhouses created a spectacle for a full house of enthusiastic fans at the Arena Armeec hall.

The Bulgarian team is now almost guaranteed a semifinal spot and only a miracle will keep them away from the competition hall this Saturday. Aleksandar Atanasijevic was the top scorer of the match with 19 points while Bulgarian captain Vladimir Nikolov notched up 16 on his tally for Bulgaria. The fantastic blocking performance of Teodor Todorov produced 10 points which made a big difference in the match.

“It feels so good to play in front of these wonderful fans,” Serbia captain Bojan Janic. ”Unfortunately, Serbia could not find its own game and lost deservedly. On the other hand, this may not be so bad, because our team has two more games to play and chances to qualify for the final are still open.”

“I am very glad that we managed to win against the reigning European champion,” Nikolov added. “We played excellent from the beginning until the very end of the game and did not give up in the tough moments. We found the strength to fight for every point.”

“Today Bulgaria played better volleyball than we did, especially in blocking and serving,” Serbia coach Igor Kolakovic admitted. “At the same time there were too many mistakes in our game. We played without passion, but we must not forget that tomorrow is a new day with a new challenge waiting for us.”

Bulgarian mentor Radostin Stoytchev returned the compliment to Serbia however.

“Obviously, we won a very important game, which gives us the right to play in the semifinals. I congratulate the team of Serbia, especially their coach, who made the game hard for me. We are happy, but we should not forget that our work is far from being done.”

Spain began their campaign on the right foot, beating Slovenia 3-0 (25-17, 25-23, 25-18). Iban Perez scored 16 points to top the scores with teammate Jorge Fernandez Valcarcel adding another 13 for Spain. Mitja Gasparini was Slovenia’s most prolific player with 12 points.

“Our team had too many problems today,” Slovenia captain Tine Urnaut said. “Our offense was insecure and we could not score enough on a good reception. We lost too many points in a row and let our opponent dictate the pace of the game.”

“It was a very good game for us, but I am sure that we can play much better,” Spanish captain Guillermo Hernan Ruperez commented. ”Now it is time to start thinking about tomorrow. We will try to do our best against Serbia and qualify for the final round.”

“Our team played its worst game in the last two and a half seasons,” a disappointed Veselin Vukovic, coach of Slovenia, said. ”Spain deserved the win, but we helped them a lot with our low spirit, lack of concentration and poor performance in all elements.”

His Spanish counterpart Fernando Munoz Benitez was in a better mood, saying: “It was important for us to start the tournament with a win, so I am very happy with the result. Our young team was paying attention to the game and made good technical decisions. I hope we can improve our performance in the side-out phase and be better against Serbia tomorrow.”

BRA M: Ricardo speaks of happiness as he returns for Brazil