Puerto Rico captured its first victory of the 2012 NORCECA Men’s Continental Olympic Qualification Tournament Wednesday with a 25-15, 25-18, 25-16 victory over Dominican Republic at the Walter Pyramid in Long Beach, Calif. 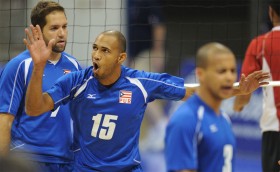 Puerto Rico’s offense netted the key difference with a 42-27 advantage in attack points and converted 58.1 percent of its attacks. Puerto Rico also produced a 9-1 margin in blocks and charted 39 successful receptions on 42 chances led by Jose Rivera’s 20-of-20.

With the victory, Puerto Rico remained alive in the gold-medal chase and will play in the quarterfinals on Thursday following a 1-2 record in Pool B. Dominican Republic finished Pool B with a 0-3 record and will face an undetermined opponent on Friday during the Classification 5-8 round.

“For us it was a very important match,” Puerto Rico captain Victor Rivera said. “We came out stronger today, a little more confident. We know we can play better. I think the Dominican is in the same situation as we are. We’re restructuring and trying to get better day-by-day. We executed and we got the victory. I think it’s important to raise our level.”

“I am happy with the victory,” Puerto Rico Coach Carlos Cardona said. “We needed to win this match for the playoffs. It helps our hopes for the future. We had a good game. We are improving little by little. There was an opportunity for everybody to play without the pressure of winning. It was a good performance.”

“We have been playing at the same level,” Dominican Republic captain Jose Miguel Caceres Gomez said. “We played better today. We are in the same situation as Puerto Rico.”

“Puerto Rico looked much superior to Dominican team,” Dominican Republic Assistant Coach Hector Romero Medina said. “We had problems in the Dominican, some important players didn’t have visas to get in. Other players couldn’t come because of family trouble.”