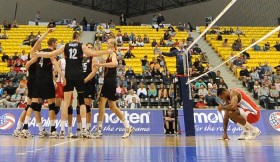 Canada took advantage of 21 errors by Cuba and held margins of 6-2 in blocks and 5-2 in aces. Canada converted 62.3 percent of its attacks (43 of 69) for points thanks to setter Joshua Howatson’s 22 running sets and 44-of-52 successful service receptions.

Canada Captain Frederic Winters: We knew that this was the really important match for us. I think USA is the strongest team here.

We want to play them in the finals. We haven’t accomplished our goal yet, but we’re on our way. Were really happy with the result. Good team effort. We’ll see who we play on Friday.

“We’re obviously happy with the result,” Canada Coach Glenn Hoag said. “We only have one chance for this. Now we’ll focus on the semifinal. This Cuban team is much younger than the Cuban teams we’ve played in the past. I thought we had very few errors and our serving was really good.”

“The game obviously didn’t go well,” Cuba captain Wilfredo Leon said. “There were many errors on our side. This is where we became disjointed. We knew it was going to be a strong match, but it was not our day. The competition keeps going and there is still the possibility to win.”

“Canada played very well today,” Cuba coach Orlando Samuels said. “They get the credit – they played well. They set well, their block and defense (were good). They played better than us. Congratulations to Canada.”