CSV Olympic Qualifications for women have started yesterday in São Paulo, Brazil. The Brazilian national team, in addition to being the host, is a favorite of the competition, together with Argentina and Peru. The national teams of Venezuela and Colombia expect to compete in the semifinal round. 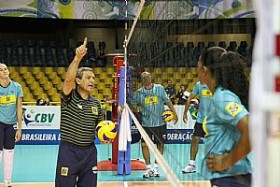 Colombia highlights the presence of Madelynne Montaño, coming from the great season in Korea, where she won the championship and was elected the MVP of the Final. The players of Peru returned from the preparations in Italy and Great Britain and are ready to defeat Brazil and represent the continent at the Olympic Games. The coach of Brazil, Jose Roberto Guimaraes, commented on the competition: “The spirit of the team is very good. They are happy here in São Carlos, especially for playing in front of our fans. The struggle for classification is the most important to them.”

“Colombia, Argentina and Peru are the teams with tradition and are very difficult rivals. They have players who have participated in major competitions abroad. These national teams have developed and, of course, this means that our team has to play much better,” said Ze Roberto.