Sofia, Bulgaria, May 9, 2012. The national team of Spain hammered out a perfect start of its campaign at the 2012 Olympic Games - European Qualification for men in Sofia. The team of Fernando Munoz Benitez rushed into the battles of Pool I play at Arena Armeec hall with straight sets against Slovenia – 3:0 (25-17, 25-23, 25-18). 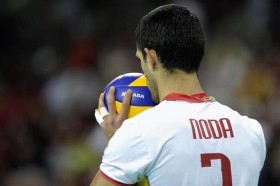 In the first set Spain’s block proved very difficult for the Slovenian offense to overcome. At the same time Iban Perez, Manuel Sevillano and their teammates were unstoppable in attack and they quickly cruised to a final score of 25-17. Slovenia had nothing more to lose.

At the beginning of the second set the team mentored by Veselin Vukovic stepped up its serving and its blocking and took charge of the court.  It made a great start for 6-1, but after 9-5 allowed Spain to win the next five rallies for 9-10 – a blow Slovenia never recovered from. Iban Perez continued to spike point after point. At 24-20 Spain was only a reach away from winning the set, when Slovenia fought back to narrow the gap to 24-23 when a serving error put an end to this part.

In the third set Spain was once again the complete ruler of the court. With great performance in blocking and with help of the many unforced errors Slovenia made, Fernando Munoz Benitez’s players managed another impressive result of 25-18 to finish the match in straight sets.

16 points from Iban Perez made him the best scorer of the match, with teammate Jorge Fernandez Valcarcel adding another 13 for Spain.

Mitja Gasparini was Slovenia’s most prolific player with 12 points