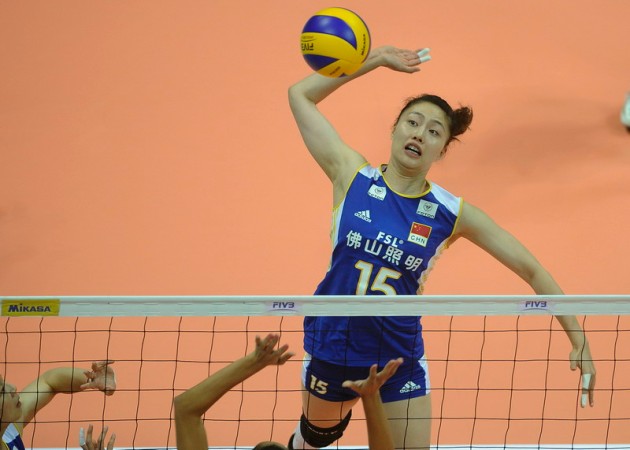 Brazil had 17 successful blocks while China had only eight. Menezes Thaisa and Castro Sheilla scored 18 points each to lead the game, Claudino Fabiana added 14.

The top scorer of China is Hui Ruoqi, who contributed 13 points, including 11 kills and two ace serves.

The Brazilians,title owner of the 2008 Beijing Olympic Games, jumped to a 8-3 lead in the opening stage, forcing China head coach Yu Juemin to call time-out twice in less than 10 minutes.

When the game resumed, Hui led the Chinese team to fight back with an 4-1 run to level the game at 12-all, she contributed a block and a kill.

But Brazil soon got the upper hand back with their solid defense and maintain the narrow lead to 21-16. Sheilla‘s kills from right side of the net moved Brazil to the set point and the victory at 25-21.

The two teams played more consistently in the second set where China established an early lead 10-6 after a 4-0 run led by middle-attacker Xu Yunli.

Zhang Lei helped hold the lead with a couple of shots and a good block as the Chinese team pushed the game to 15-10. Brazil tried to cut the deficit at 21-23 but Fan Lili‘s kill gave China the set points and an out-of-court shot from Brazil player allowed China claw one set back with 25-21.

China fought hard early in the third set and managed to stay up at 7-5, but Brazil soon answered with a 3-0 run to lead into the first TTO at 8-7. The firm blocks from Brazil helped them extend the lead to 16-10 as Fabiana and Sheilla combined to stop China‘s attack several times over the net. At 24-17, Thaisa again refused a spike from Hui to make Brazil lead the match again 2-1.

The Brazil women started strongly against the host, racing to an 6-0 lead and improved it to 16-7 at the second TTO. China made some substitutions as Chu Jinlin came out from the bench to score three points in a row to help China pull with 11-16.

But Brazil cruised to the victory of the set at 25-18 by running off four of the last six points before going on to seal the match in one hour 39 minutes.