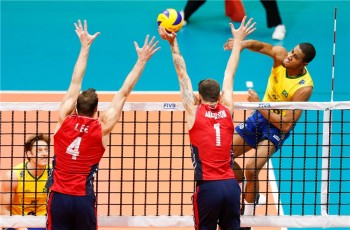 When two giants clash in such an important game than you can’t expect anything less than a volleyball classic! Brazil and USA played a fantastic game. At the end, fans in Rio celebrated a win together with their heroes dressed in yellow, blue and green!

It has all started with a thrilling first set. Brazil missed 4 set points, but then Lucas Saatkamp jumped at the right moment and made a strong block on David Lee! Brazil was in the lead – 28:26!

However, the USA squad answered immediately. The away side was constantly in the lead throughout the second set and they finished it with a block on Ricardo Lucarelli – 25:22! It was 1-1 in sets, but remember the name of this Brazilian…

A true drama started from the third set. USA were again marching ahead and they were up by 16:13… But, Brazil turned on the engines at the right time and tied the score at 19:19. Then the home team went ahead at 20:19! The key moment happened at the score 23:22 for Brazil. USA did not organized such a good attacking play, so Matt Anderson had to spike from difficult position… He sent the ball out of bounds – 24:22! Boys led by Bernardo Rezende used the very first set ball thanks to the excellent spike by Ricardo Lucarelli – 25:22, 2-1 in sets for Brazil.

Everything was looking perfect for the hosts. They had the lead, they had the crowd and they were up by 18:13 in the fourth set! But, it just could not be that simple. USA performed a stunning comeback as they firstly tied the score at 19:19 and then even took over the lead at 22:21! Still, they did not managed to go all the way to the end. Brazil scored next two points and regained the lead – 23:22. While then the home side used their fourth match point for 27:25, 3-1! It happened really quick, USA had a bad reception, while guess who punished that with a strong spike on the net? Ricardo Lucarelli! We told you to remember that name.

Now, both France and Brazil have 3 points, while USA have 0 points. As in the last round we will have a game between France and USA it is possible that the set ratio or even the point ratio will determine the semifinalists!

OFFICIAL – Alberto Giuliani is the new head coach of Piacenza!

WL: How much skill you need for this? Magical set by William! (VIDEO)