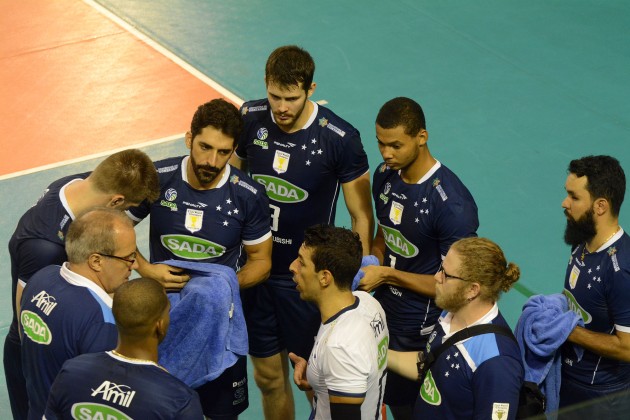 Title holders were shocked at opening set, but overall, had more success in defending the leadership. Because of the combined line-up introduced by Argentine coach Marcelo Mendez, Cruzeiro were instantly punished. So, he had to send William Arjona and Wallace Souza (20 points) on the court. The reaction of Cruzeiro’s players ended with the final victory. The Cuban Yoandy Leal was in protocol, but didn’t play at all. His compatriot and the 1998 World League winner Ángel Dennis showed that, despite his age (38), was still in a great shape scoring 28 points!

Another huge winning streak was extended in Round 14 of Superliga – Sesi-SP’s. They achieved 8th victory in a row!

Sesi outplayed Montes Claros Vôlei on road 3-1 (25-20, 23-25, 25-16, 25-15), achieving third consecutive away victory. The team under command of the coach Marcos Pacheco remained in the third position in the standings. Douglas Souza from Sesi and André Luiz Nascimento from Montes Claros were the best scorers of the game with 16 points each. Despite announcing that newcomer Riad Ribeiro will travel with the team on this match, he was not a part of the 12-player roster of Sesi so his debut is expected in the next round.

POL W: Wołosz challenges Skowrońska – Can you train like me? (VIDEO)

BRA M: Due to uncertain situation with...