Brazil will try to prolong its supremacy by taking on the USA in the Olympic final that is scheduled for this coming Saturday after downing Japan in straight sets (25-18, 25-15, and 25-18) in the second semi-final played at Earls Court in front of 15,000 fans. 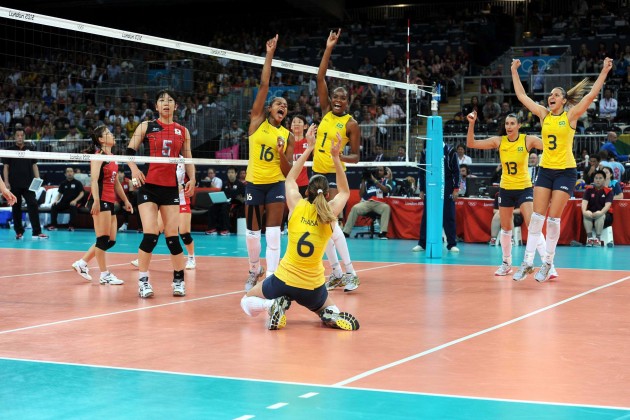 The last and deciding act of the women’s tournament will be a remake of the final played four years ago in Beijing as well as of the match played in the prelims and claimed by the USA with the score of 3-1. Japan never really challenged the players around Sheilla Castro and failed to make it to the Olympic final with their last appearance in a gold medal match dating back to the 1976 Olympics in Montreal. Still Team Japan will have the chance to go for an Olympic medal by playing Korea in the classification match that is also scheduled for Saturday at 11.30 am. Brazil’s dominance was overwhelming with five players finishing the match in double figures – and Sheilla setting the tone with 14 – while Japan star Saori Kimura could not do much to resist to that Brazilian storm even though she also chipped in with 14 points.

Brazil won many points with finesse shots and blocks rather than spikes, with captain Fabiana Claudino, Fernanda Rodrigues, Sheilla Castro and Thaisa Menezes all scoring. They pulled away towards the end of the set, which Brazil won 25-18.

Jaqueline Carvalho and Ai Otomo added to the scoring in the second set, but with Brazil having a wider range of scoring options and Japan relying heavily on Kimura, the South Americans stretched easily ahead and won the set 25-15.

Claudino, Castro, Carvalho, Menezes and Rodrigues continued to dominate as Brazil led in the third set. Their spiking, blocking and defence was all top class as they took an early lead. Japan came back, with Otomo, Kimura and Ebata solid, but once again, Brazil had too much power. They took the set 25-18, and the match.

OG W: Brazil and USA to fight once again for women’s Olympic gold