BRA M: VOLLEYBALL FIGHT IN BRAZIL! Everything started from coaches!

The match between Caramuru Volei and Sao Bernardo had a very ugly ending... 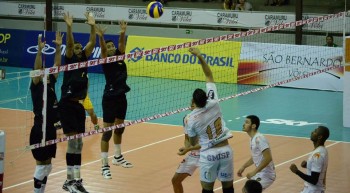 According to Bruno Voloch, the coaches of Caramuru Volei and Sao Bernardo were responsible for causing a volleyball fight after they teams finished a thrilling tie-breaker.

This source write that Sao Bernardo head coach Douglas Chiarotti and Caramuru Volei head coach Fabio Sampaio started arguing and cursing each other already during the match. They even called each other for a fight outside the gym. while when the match ended the fight actually happened!

Allegedly, Fabio exchanged some punches and kicks with Sao Bernardo assistant coaches in the locker room, while Douglas Chiarotti was taking pictures with the fans. But, when Chiarotti heard  what was happening inside, he ran toward the locker room and joined the fight himself!

Voloch writes that the incident was reported to the game commissioner, who will file a full report to the CBV.