EMS Taubaté Funvic broke a 12-game winning streak of Sada Cruzeiro, counting official games only, that lasted from March 12 by beating the big rivals in the 11th round of the Brazilian Men’s Volleyball Championship Superliga! 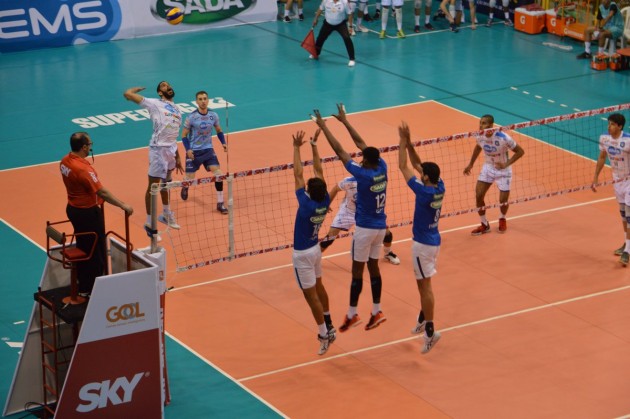 In a two-hour battle, and nothing else was expected from these two powerhouses, Taubaté threw defending champions Cruzeiro on their knees in the tie-break, inflicting them the first defeat in five games in the 2017/18 Superliga, a 12 games in total counting the last season as well. Taubaté also became the only club to beat Cruzeiro over the last year. The first time they did it was on March 9 and the second time was last night.

Both teams had a huge blocking display: Taubaté 15 kill blocks (Otávio Pinto 5), Cruzeiro 18 kill blocks (Isac Santos 5). Offensively, the winning side was more diverse, having five players at double digits in points, led by the Brazilian National Team duo Wallace Souza – Ricardo Lucarelli who both notched 15 points. In Cruzeiro, who committed an unusually large number of errors (44), the Cuban Yoandy Leal made 21 points.

It was the last-round game of Superliga of the first part of the season, which was scheduled for mid-December, but Cruzeiro played it now since, at that time, they will be engaged in the 2017 FIVB Club World Championship in Poland.

BUL M: Bulgarian NT blocker no longer free agent as he signs with club in his home country