EUROVOLLEY 2017 W: Serbia end their EuroVolley campaign with a perfect record to claim the gold medal!

Serbia downed The Netherlands in Baku finals to conquer EuroVolley 2017 and become the continental champions for the second time in the history of their Women’s volleyball! 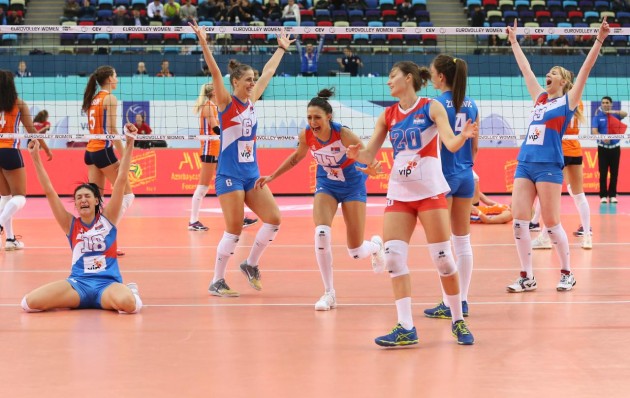 In all six matches which they played in the 2017 CEV Europan Championship in Azerbaijan and Georgia, Serbia dropped only two sets of which one of them to the Dutch National Team in the finals in a crowded „National Gymnastics Arena“ in Baku, 3-1 (25-20, 25-22, 18-25, 25-18). With this kind of domination, the gold medal could not slip out of the hands of Serbia’s players!

Thus, Serbia equaled their result from the EuroVolley 2011 on their home soil.

The Dutch side pushed Serbia to the limits as the Serbian National Team failed in reception 41% – 53% but prevailed in the attack 48% – 35%, led by amazing opposite Tijana Bošković who made 29 points! Yvon Beliën topped The Netherlands with 13 points.

TUR W: The U.S. receiver Courtney sidelined until the end of the season

Boskovic is a monster, she`s amazing.