Czech Republic stayed undefeated in Pool C while Croatia this time were better than Hungary in the Leg 5 of the Golden European League 2018 for Women. 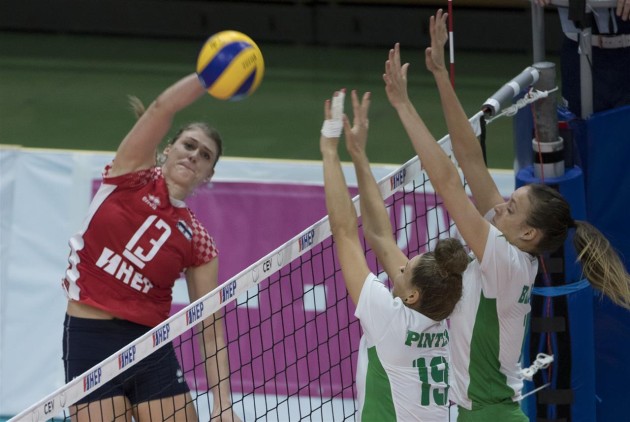 After a defeat from Bulgaria, Azerbaijan continued with good performances. Today they scored their fourth win but the second in a row. Yelizaveta Samadova and Odina Bayramova with 16 points each led the winning team while Julia Kavalenka led Portugal also with 16 points but the host team finished their fifth round without single point. Azerbaijani setter Yana Azimova was the key player since that she well organized each point for her team.

After this victory, Bulgaria remain on the top of Pool A. They scored their fourth win and Silvana Chausheva was the main scorer with 13 points but the best player in the winning team was Nasya Dimitrova who scored 11 points with 82% effects.

Croatia successfully finished the match against Hungary. In their first clash the Hungarians won, but today Croatian team won in the tie-break. Samanta Fabris scored 31 points for the winning team and she was the real leader while Mia Jerkov finished the match with 15 points. On the other side, Renata Sandor was the top scorer of Hungary with 24 points.

Finland are now on the top of Pool B after they defeated France and scored the fourth consecutive victory. France are still without win and point and they won only two sets in five matches. Pauliina Vilponen (17) and Piia Korhonen (15) were the main stars of the winning team while Alexandra Dascalu (16) and Helena Cazaute (15) led French team.

Chezch Republic are for now the only undefeated team in the whole European League. Today they defeated Belarus in the first derby of the Pool and the match was finished after 79 minutes. Michaela Mlejnkova with 20 points once again led the winning team.

Slovakia scored their first victory in Pool C although Spain had chances to take some points. Both teams scored many blocks, Spain 12 and Slovakia 11 but at the end, the guests won.  Nikola Radosova was the best scorer of the winning team with 19 points while Ana Escamilla Serrano led Spain with 23 points.

See schedule and results, as well as stats of CEV Golden European League.